Although only the proposed South Swindon parish and its boundaries are discussed, many of the points made are applicable to other of the proposed new parishes and their boundaries.

Do you agree with the boundaries proposed in the consultation map?
No. If South Swindon is to be parished, Old Town, Lawn and Okus should not be part of a parish containing the new developments of Wichelstowe, Marlborough Park and Badbury Park.

Please provide further detail about your opinion/position
As noted in the Council’s own documents on the review, Section 93 subsection 4 of The Act requires that in conducting this Community Governance Review, Swindon Borough Council must ensure governance in the area under review is

Paragraph 33 of The Boundary Commission Guidance indicates how the first of these points should be satisfied. It states

Paragraphs 50 and 80 add to this by stating

Paragraph 50 “Parish councils continue to have two main roles: community representation and local administration. For both purposes it is desirable that a parish should reflect a distinctive and recognisable community of place, with its own sense of identity. The views of local communities and inhabitants are of central importance.”
Paragraph 80 “The general rule should be that the parish is based on an area which reflects community identity and interest and which is of a size which is viable as an administrative unit of local government. This is generally because of the representative nature of parish councils and the need for them to reflect closely the identity of their communities.”

The Cabinet Report of August 2016 states in paragraph 3.27 in relation to the proposed South Swindon parish:

“The residents of the new homes at East Wichel have strong community identity links with other parts of the main urban area rather than with the largely rural Wroughton parish to the south.”

Whilst it may be the case that many in East Wichel have ‘strong community identity links with other parts of the main urban area’, it is not true to say that those links are with the immediately adjacent areas of Old Town and Okus, and no credible evidence of such links is provided. Although the same paragraph of the document states

“There was also a submission to the 2011 LGCBE requesting the creation of a Wichelstowe and Okus ward, which is evidence of a shared identity there.”

However, in 2011 less than half of the houses in East Wichel had been built, and a single submission to the boundary commission cannot be deemed to be representative of the community, particularly as it is not identified as being a submission from the community. Having reviewed the documents submitted to that boundary review it appears the suggestion was one from a political party (namely the Labour Party’s proposal to stage 1 of the review) in 2010, and not from the communities in Okus or East Wichel. It is thus not credible to use this as evidence of being “reflective of the identities and interests of the community in that area”.

“The West and Middle Wichel areas, once developed, will also have community, housing tenure and transport links that will make them more similar to the contiguous urban core to which they are attached.”

There is no evidence for this. Whilst Wichelstowe is likely to have similar community to the other newly developed areas in the proposed South Swindon parish, such as Badbury Park, it is far from clear why the mainly high density housing in Old Town and Okus would be expected to have similar ‘community, housing tenure’ to the lower density areas now being developed closer to the M4.

Section 94 of The Act permits parish councils for parishes with more than 150 local government electors and requires them for parishes with 1,000 or more electors. Paragraph 80 of The Boundary Commission Guidance also gives specific guidance on parish size, in relation to community governance being effective and convenient.

“The general rule should be that the parish is based on an area which reflects community identity and interest and which is of a size which is viable as an administrative unit of local government…. It is desirable that any recommendations should be for parishes or groups of parishes with a population of a sufficient size to adequately represent their communities and to justify the establishment of a parish council in each. Nevertheless as previously noted, it is recognised that there are enormous variations in the size of parishes, although most parishes are below 12,000 in population.”

Paragraph 81 of The Boundary Commission Guidance indicates that a parish representing a single estate or development is acceptable:

“A parish council should be in a position to provide some basic services and many larger parishes will be able to offer much more to their local communities. However, it would not be practical or desirable to set a rigid limit for the size of a parish whether it is in a rural or urban area, although higher population figures are generally more likely to occur in urban areas. Equally, a parish could be based on a small but discrete housing estate rather than on the town within which the estate lies.”

Paragraph 82 of The Boundary Commission Guidance indicates when larger parishes may be acceptable:

“There may be cases where larger parishes would best suit the needs of the area. These might include places where the division of a cohesive area, such as a Charter Trustee town (see paragraphs 133 to 134), would not reflect the sense of community that needs to lie behind all parishes; or places where there were no recognisable smaller communities.”

None of the criteria in Paragraph 82 of The Boundary Commission Guidance apply to the communities within the proposed South Swindon parish, yet Paragraph 3.29 of The Cabinet Report of August 2016 dismisses a proposal for a smaller parish:

“The residents of the new development at Badbury Park have expressed a desire to set up their own parish; however, as this area is still under construction, it is deemed too small at this time to provide convenient and effective local governance.”

This appears to be inconsistent with The Boundary Commission Guidance deeming that there may be significant variation in parish size and it still be consistent with effective and convenient governance.

“As far as boundaries between parishes are concerned, these should reflect the “no-man’s land” between communities represented by areas of low population or barriers such as rivers, roads or railways. They need to be, and be likely to remain, easily identifiable.”

The boundary for the proposed South Swindon parish through Old Town, whilst it follows the line of roads, clearly does not ‘reflect the “no-man’s land” between communities represented by areas of low population’, as there is no reason to believe that residents or businesses on the opposite sides of Bath Road, Albert Street and Church Road would regard themselves as being in different communities. The boundary between the canal at Rushey Platt and the Great Western mainline also seems arbitrary. Whilst it is in what, at the moment, a no-man’s land, it is in part following a minor stream and in some parts aligned to nothing whatsoever. It thus does not meet The Boundary Commission Guidance “to be, and be likely to remain, easily identifiable.”

It is not apparent how, in a way that is consistent with The Boundary Commission Guidance, Old Town can be separated for parishing purposes from Swindon New Town. A boundary that would be in ‘the “no-man’s land” between communities’ and would “be, and be likely to remain, easily identifiable.” would be one along the course of the former railway line from Rushey Platt to Old Town, from the point where it crosses the Great Western mainline, to the boundary of housing on Wyvern Close, running to the south of Fitzroy Road, Ambrose Road and Linley Close, Tismeads Crescent and Riverdale Close, then to the north of Nationwide and Intel offices offices, then north of the Marlborough Park development but behind the housing on Marlborough Road, to rejoin the Council’s proposed boundary at the Coate Water roundabout. Placing the boundary in this way would also limit the disruption to the longer established parts of south Swindon when, as noted in Paragraphs 3.56 and 3.57 of the The Cabinet Report of August 2016,

“Members are aware of the expected housing completions in Badbury Park as well as the expected new homes that are to be built in West and Middle Wichel…. Therefore, Cabinet is asked to note that a further Community Governance Review may become necessary in the next few years, depending on the rate at which these new communities become established.”

Any other comments relating to the Community Governance Review
Section 93 subsection 5 of The Act states:

In deciding what recommendations to make, the principal council must take into account any other arrangements (apart from those relating to parishes and their institutions)—

for the purposes of community representation or community engagement in respect of the area under review.

Paragraph 136 of The Boundary Commission Guidance expands on that, stating:

In deciding what recommendations to make, the principal council must take into account any other arrangements (apart from those relating to parishes and their institutions)—

for the purposes of community representation or community engagement in respect of the area under review.

The Council does not seem to have considered amending its use of its existing Locality teams and of existing community associations as part of this Community Governance Review. Papers to the Swindon Borough Council Cabinet meeting of 16 June 2016 on “Future Direction – Transfer of Services to Parish Councils” note that

“The Cabinet could continue with the existing service delivery model”

but do not discuss options for amending the current model. I also note that the focus in the papers to Cabinet in this respect is on service delivery, not community governance. It therefore seems that the requirements of Section 93 subsection 5 of The Act have not been fulfilled and that the recommendations of Paragraph 136 of The Boundary Commission Guidance have not been followed.

“Parishes should reflect distinctive and recognisable communities of interest, with their own sense of identity. Like neighbourhoods, the feeling of local community and the wishes of local inhabitants are the primary considerations.”

The overwhelming view of inhabitants in the the areas that are currently unparished, as expressed in responses to the earlier stages of this Community Governance Review, is that they are opposed to their areas being parished. It thus appears that in continuing to propose the parishing of areas that are not currently parished, Swindon Borough Council is failing to regard “the wishes of local inhabitants” as “the primary considerations”, in contravention of The Boundary Commission Guidance. 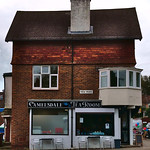