Skip to content
HomeUncategorizedSome cycle routes are more practical than others

As part of the planners’ aim for Wichelstowe to be a so called sustainable development, the original masterplan makes plenty of provision for cyclists. Not all of it is entirely practical though. I’m not the first to comment on the cycle route along Peglars Way and Foxham Way. Others passed this way a year ago and were not wholly impressed. A year later and they still weren’t happy. 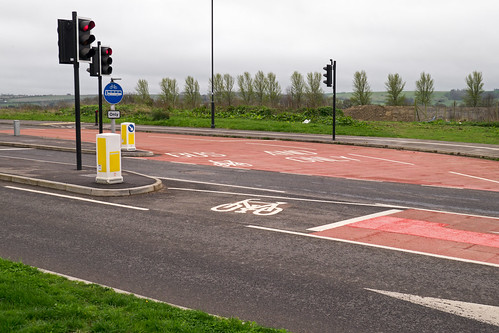 Approaching along Foxham Way from Mill Lane, after negotiating a roundabout with raised cobbles, the cycle lane starts in the middle of the road. To use this cycle lane one has to ride down the central bus lane, marked red to the right of the short cycle lane, in order to hit the pads in the road that work the traffic lights, then do a sharp right turn to hit the cycle lane pads. It might be worthwhile if it were not that the cycle and bus lane ahead is rather short, crossing back over the road a couple of hundred yards further on. At that second junction there are again traffic lights, but with a very long gap between them turning red for motorists on Foxham Way and turning green for cyclists and buses heading for East Wichel Way. I’ve now seen several motorists stop for the red light then, noticing there is no bus waiting to cross, get impatient and drive on. For cyclists content to disregard road markings, ignoring the cycle lane, heading straight on along Foxham Way and then turning left (against the road markings) into East Wichel Way is far quicker, and probably no less safe.