Mr Thompson seems to think that, just because he gave a fraction of his councillor’s allowance to charity, that makes it alright for him to continue taking the payments even though he left the country over six months ago. I presume then that if someone burgled Mr Thompson’s home but gave away a few items of the stolen property to charity, Mr Thompson would regard that as perfectly acceptable….

As I read of Ms Snelgrove and Ms Howard attempting to defend Mr Thompson’s behaviour of remaining a councillor whilst he was residing in Spain, I can’t help wondering why they are doing this. Presumably out of some odd sense of loyalty that puts the interests of their colleague ahead of those of their constituents… and ahead of their electoral interests too. To defend, as they do, an elected representative who took payments from the public purse whilst not fully performing the duties those payments were for, gives the impression that they put politicians’ own interests before those of voters. Whilst contempt for voters amongst politicians is nothing new, it is disappointing to see so solid a show of such contempt from Mr Small and his colleagues.

It’s so nice to see Mr Small and the local red nest putting their electoral convenience before the interests of the people they represent. As first reported on the TalkSwindon forum, Mr Thompson has been in living in Spain since January and hasn’t attended a council meeting since July last year. You’d think that if you’re too ill to represent your people, the best thing to do, for both councillor and those they represent, would be to resign and rest in the hope of making a quick recovery. Apparently not, according to Mr Small.

There is no secrecy about the fact that Barrie is going to resign. I would expect him to step down by around mid-March. We want to save the council taxpayers extra expense by not calling a by-election.

What carefully chosen words. There was plenty of secrecy: there is no secrecy now only because others have revealed what is going on. I also don’t recall the red nest having such a level of concern for taxpayers in the past when members of their own party flew the nest to the opposing side. It’s difficult to see this as anything other than political self-interest masquerading as concern for the people.

There seems to have been a slight reversal in which councillor gets the front page treatment for their misdemeanours. This time it is Councillor Heenan making the headlines for driving without insurance and not displaying a tax disk, whilst Councillor Glaholm’s resignation from the chair of Swindon Borough Council’s Scrutiny Committee (following his recent indiscretions) has yet to be reported in any place of significance. I just hope Councillor Heenan is better at town planning than he is at planning (and monitoring) his car insurance renewal.

The wandering Councillor Glaholm (who chairs Swindon Borough Council’s Scrutiny Committee) has escaped with a formal police caution. He seems quite keen to play down what this outcome implies.

The only thing I am going to say is that I haven’t been charged and the matter is closed and my solicitor advised me to make no further comment and I won’t.

One does not get a police caution through being innocent. To quote the Criminal Records Bureau:

A caution is a formal warning about future conduct given by a senior police officer, usually in a police station, after a person has committed an offence. It is used as an alternative to a charge and possible prosecution.

and to quote from the Home Office:

A caution can be given when there is sufficient evidence for a conviction and it is not considered to be in the public interest to institute criminal proceedings. Additionally, the offender must admit guilt and consent to a caution in order for one to be given.

It would be interesting to know in what way it was not in the public interest to proceed with a prosecution in this case.

In public life, the point often made is that it is not enough to abide by the appropriate standards, but one also has to be seen to abide by those standards; it is not enough not to commit any misdemeanours, one must also avoid the perception that one might have committed a misdemeanour. Regardless of what may be the outcome of Councillor Glaholm’s recent arrest, that perception of the highest standards being maintained has gone. (Some might say it went when he was arrested whilst mayor in 1994.) To have such a person chairing Swindon Borough Council’s Scrutiny Committee, especially when the council has only recently changed its constitution to allow him to do so, looks distinctly tawdry. 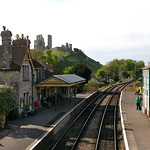